Our free public forum was a big success! Around 110 people attended on that dark and stormy night, almost filling the wonderful Columbia HS Library room. Darryl started it off with a PowerPoint slide show, “A Geographic Overview”:

Here are summaries of presentations made by panel members from the Yakama Nation, U. S. Forest Service (Mt. Adams Ranger District), Washington Dept. of Natural Resources and Mt. Adams Resource Stewards. Steve Andringa spoke for 20 minutes, since well over three-quarters of the burn was on the Yakama Reservation. The other talks were 10 minutes each. Three of the invited panel members, Jessica Hudec (Gifford Pinchot National Forest), Albert Durkee and Larry Leach (both from WA DNR) did not make presentations, but they participated in answering questions from the audience. A 41-minute audio recording of the Questions and Answers portion of the forum follows the summaries of the panel speakers. Moderating the forum was Jurgen Hess, board member of Friends of Mount Adams.

Steve Andringa, Administrative Forester for the Yakama Nation. He managed the YN Forestry Program for many years and is former manager of the YN Mount Adams Recreation Area:

For the whole 53,500-acre fire, about $25 million was spent in direct suppression costs. In addition the Yakama Nation spent $2 million for initial/extended costs and $1 million for emergency stabilization (replacing culverts, etc.). The cost to the Tribe for rehabilitation—mostly tree-planting—will be about $5 million. There will be other economic costs, such as salvage harvesting in depressed market conditions. Other values hard to quantify are water quality degradation, wildlife losses, etc.

The area of the burn on the Yakama Reservation was about 41,500 acres. Almost 19,000 acres, or 45%, was in General Forest (commercial timberlands). Over 50% of that was moderate to severe burn intensity, or stand-replacement.

Timber volume loss was about 800 million board feet of timber, or about 8% of the standing volume. Salvage is expected to yield 100 to 300 million board feet, generating somewhere between $20 to $40 million for the Yakama Nation. This is in the span of about 18 months.

The Yakama Tribal Council decided early on to salvage as much as possible to recover the timber value and support the local economy. The Tribe has a sawmill in White Sawn, WA.

Planned salvage timber sales cover about one-third of the total area burned on the reservation, or about 14,000 acres. Sales are in large units of 4,000 to 5,000 acres each. About 70-80% of each unit is expected to be salvage logged. Logging started this fall in the Bird Creek Unit.

Environmental assessment of some of the southern units has already been done. It will be expedited for the other units. Because of the Bureau of Indian Affairs involvement, the Tribe has to abide by the National Environmental Policy Act, Endangered Species Act and National Historic Preservation Act. Also the Yakama Nation Forest Management Plan, as well as Sustainable Forestry Initiative.

The fire burned over half of the 16,000-acre Yakama Nation Mount Adams Recreation Area, or about 8,800 acres. Around 6,400 acres (or 73%) burned at moderate and high severity. Steve thinks the Recreation Area will remain closed to the public through 2016. Work planned will be removal of hazardous snags along roads and in campgrounds, repair of the drinking water system, and replacement/repair of the cattle drift fence. Cattle are expected to graze on Yakama Nation lands next year.

For 2017 the Tribe hopes to open the area for day-use, at least for the trail systems. Campground recovery will begin with replacement of outhouses, picnic tables, fire pits, etc. For 2018 Steve hopes the Recreation Area will be open for camping again, but it may depend on how the public wants to use the area. People may not want to camp in heavily burned areas. Repairs will continue with an emphasis on public safety.

This plan is subject to change, but it’s a snapshot for the next few years.

Yakama Nation will continue with commercial and non-commercial treatments, including prescribed fire to reduce the risk of catastrophic wildfire. However, active management “is no guarantee.” Forest and fire management over the past 100+ years have produced stand conditions “pretty far out of whack.” Let fires re-burn dense lodgepole stands because “that’s what fires do.” Areas of the forest such as well-managed stands should be prioritized for management, to reduce the risk of stand-replacement fires.

We’re losing the pool of wildland firefighters with an aging workforce and  increased educational and training requirements. “Each agency, whether it’s Forest Service, state, local counties or Yakama Nation need to step up and provide that cadre of firefighters.”

For big game (deer and elk) there was large acreage lost—primarily summer range. Thermal cover will take decades to recover, but the fire will stimulate forage production in the next 10 years. Game and other wildlife will respond and adapt to the new landscape. Most of the winter range for deer and elk was east of the fire perimeter.

Some winter range for mountain goat burned, but fire intensity at higher levels—up to the tree line—was highly variable or completely unburned. “Hopefully mountain goat will continue to use these areas,” Mark said. The Big Muddy drainage, which burned at low intensity, is a very important east-west movement corridor for mountain goats. It links the alpine habitat to the good, low-elevation habitat along the Klickitat River. Mark hopes that mountain goats will re-use the corridor.

Cascade red fox is a rare endemic subspecies found in very low numbers in alpine and subalpine habitats on the Yakama Reservation. Since 2008, three had been detected during the wintertime within the burn area. These locations burned at moderate to high severity. Mark thought the three foxes probably perished in the fire.

The fire covered about 5,600 acres in Gifford Pinchot National Forest. About 3,000 acres were stand-replacing. Snipes Mountain, Bunnell Butte and some other small cones burned especially hot.

A public closure of the Cougar Creek Fire area is in effect until further notice or April 1, 2016 (http://www.fs.usda.gov/Internet/FSE_DOCUMENTS/fseprd478602.pdf). Exceptions are FS Roads 71 and 150.

Mose said the Forest Service was not aggressive in fighting the fire, except for successfully protecting the historic Gotchen Creek Guard Station and Wicky Creek Shelter. The highest priorities were the few cultural resources, safety of the personnel in the area and prevention of the fire spreading southward toward private timberlands and the Trout Lake Valley.

The Forest Service is seeking comments about proposed salvage of about 250 acres in the burn. Scoping Map and Scoping Letter are found at http://data.ecosystem-management.org/nepaweb/nepa_project_exp.php?project=48150. Comments are due soon, on Dec. 20th, 2015. This sale would be in upland forests allocated as Late-Successional Reserve. It has no streams, wetlands or riparian reserves. Prior to the fire, the trees were badly degraded by insects and disease. No endangered species were found in the area under consideration.

The burn covered about 4,200 acres of DNR Trust land. Economic impacts to the local community include losses in tourism, recreation, logging and grazing, plus damage to roads and the Big Muddy Ditch. Resource impacts include changes in upland and aquatic habitats, and loss of “legacy components”—large trees, live and dead. Also impacted were archeological and historical sites, either lost or damaged.

Restoration needs include reforestation, roads and infrastructure and fuels reduction. “Unmanaged stands with the wrong species and too many trees per acre” are reasons for large fires, Ken said. Firefighters are being put into “harms way dealing with this.” The DNR will “promote active management across the landscape and across ownerships. There needs to be a mosaic.” Collaboration will continue with adjacent landowners, including funding support (grants and legislative payments). “We always accept volunteer help,” Ken said.

The state’s guiding principles are to continue to manage for its trust (schools), maintain state and federal habitat commitments, and recover the value of lost resources through salvage. Salvage is governed by Washington statutes and DNR policy under its Sustainable Forestry and Habitat Conservation plans.

The Timber Sale harvest will total 921 acres on six units, ranging in size from 41 to 547 acres. About four million board feet will be removed.

There will be no logging on slopes over 35 percent, unstable slopes or in stream buffers. Only 100 feet of new roads are planned. Objectives will be to “create a resilient forest and maintain large legacy structure.” Left standing will be an average of over 40 “green trees” (10 inches or more in diameter) per acre; also four to six snags per acre in spotted owl management areas.

About 10 years ago, the Mt. Adams Resource Stewards authored a Community Wildfire Protection Plan with the Washington DNR. The plan was helpful during this fire to identify community resources such as irrigation and drinking water infrastructure. “The fire team was responsive and put resources on these sites.” However, “the plan fell short on fuels reduction. It needs revisiting, based on what we learned from this fire,” Jay said.

About 2,200 acres of private timberlands were within the fire perimeter. Much of it was moderate and low severity. The timberlands are managed by SDS and Hancock Timber Management Group. (Jay did not speak for these property owners.) There were cattle losses. Riders searched for cattle and “chased them to safety through smoke, ash and dust on a a daily basis during the fire,” Jay said. A historic mining cabin burned to the ground at a private flagstone quarry in the Tract D area.

What does the fire mean for the future in the Glenwood area? Glenwood has had three flood events already this fall, and future flooding is a significant concern. “Water came down fast, hard, black, running ash and soil,” Jay said. Upper edges of the valley were flooded. “Damage to irrigation infrastructure will run in the tens of thousands of dollars.” Bypass channels will be necessary. “Glenwood will be facing a much flashier system”—bigger flood events, drier summers and soil conditions that won’t hold water for the next five to eight years. There’s a solid body of science that deals with impacts on hydrology from large, higher-severity fire events.

Future fire events are a concern. Fires are increasingly moving downslope toward the community. “We know that old burns re-burn,” Jay said. More severe threats to our community could exist with extended dry weather patterns, low fuel moisture content and poor forest health. A number of efforts have been made over the past decade to deal with the threats. One is the Firewise Program administered by the Underwood Conservation District. It works with private land owners to develop defensible space around their homes.

“The federal government borrows money for fire suppression efforts instead of proactively reducing the threat,” Jay said. Most of the fire suppression costs go for air support to protect structures. Mt. Adams Resource Stewards has been managing its timberlands to reduce the fire threat in the Glenwood community.

Here is a 41-minute audio recording of the Questions and Answers portion of the forum:

Steve at the podium. In front: Paul, Darvel, Dean, and ?
Photo by Don Hardin. 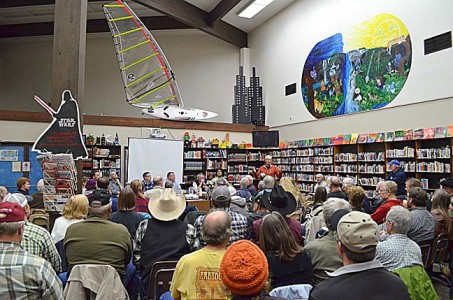 Jurgen Hess moderating the 40-min. discussion period between the audience and all of the panel members.
Photo by Don Hardin.